Definitions in art tend to be the province of critics, lumping a variety of styles together because they happen to occur at the same time.  (In the theatre, think of Martin Esslin defining Theatre of the Absurd by grouping Ionesco, Beckett and Pinter who, in my opinion, occupy very different niches.)  So it is with Postmodernism, a description applied rather vaguely to art and architecture.  Thus before I try to apply the term to theatre, I need to attempt a definition here, just so that you know what I’m talking about.

Part of Postmodernism is deconstruction: exposing elements of an artwork to acknowledge that it is art, and therefore an artificial construction.  It is art that talks about itself.  In theatre, this would be anything the breaks the audience’s suspension of disbelief and reminds them that they are sitting in a theatre watching a show.  If you are being extreme about this, you could argue that anything that breaks the fourth wall (the invisible barrier between auditorium and stage) and has members of a cast interacting directly with the audience is postmodern, but then you would have to include many theatrical presentations, including pretty much every panto (see Who Talks Back).  No, to be Postmodern, you have to go further in exposing the mechanics of the production to the audience – for example by bringing on the stage crew or director. 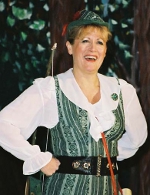 Having written it in that way, I realise that I have indulged in occasional Postmodern elements myself.  In Robin Hood and the Singing Nun there is a scene set in Sherwood Forest created by a backdrop with a couple of cut-out trees.  The next scene opens in the same set but another part of the forest, with Will Scarlet complaining that they all look the same.  Robin assures him that the trees are further apart.  When Will says “They look the same to me”,  two crew members come on and move the cut-out trees by a few inches.

That broke the flow.  It reminded the audience that they were looking at plywood and paint, rather than a real forest.  They knew that already, of course, but they’d pushed it to the back of their minds in order to believe in character and plot.

So why do it?  Well, in that case, it’s a visual joke.  It gets a laugh (and, occasionally, a round of applause) and the pace of the show ensures that the audience are quickly back into the swing.  On the other hand, we have rejected scripts that call for the director to come on stage to argue with the cast.  The reason for the rejection is that the elements of Postmodernism served no purpose in the script.  It may have been funny to the writer to expose the mechanics and tensions of a production, but (in the opinion of our reviewer) rather than being funny for the audience, it would have been pointlessly disruptive.

So how far you go with Postmodernism on the stage depends on what you are trying to do with it.  It has to serve a purpose.  James Barry has a Postmodern touch in his comedy Sherlock’s Excellent Adventure.  Following Conan Doyle, the adventure is told from the perspective of Dr Watson.  At one point, he deliberately uses narration to change the direction of the plot, only to have the narrator role snatched from him by Moriarty.  In the context, this works: it is comical, it stays within the boundaries of the format and it moves the plot along.
Luke Reilly has taken this much further in his adaptation of Hansel and Gretel, in which the whole point of the structure is to look at the relationship between writing, audience and stage.  This will not be to the taste of anyone looking for conventional pantomime, but it does what it intends to do in exploring those boundaries.  After some discussion about how we should bill such a work, it eventually became A Postmodern Pantomime.

The pantomime season is drawing to a close.  Time for a little bit of reflection…

One of the traditions of British panto is that characters break the fourth wall – that is to say they acknowledge the presence of the audience, talking directly to them and, in many cases, getting a response.  This can be good and bad.  The risks are that it breaks the audience’s suspension of disbelief, reminding that they are in a theatre, watching an ordinary mortal in a silly costume on the stage, and that it slows down the pace of the show.  Set against that the opportunity for the audience – particularly children – to do something other than sitting still and watching, and the chance to short-cut some of the plot.

On that last point, I am always nervous about the presence of a narrator in any show.  It’s telling, instead of showing.  However, the characters who talk to the audience in pantomime can be used to convey some information in a more direct fashion.  If it’s done well, then it comes over as a friendly chat whilst planting seeds of character and plot (“Have you met Cinderella yet?  No?  Oh, she is lovely…  But I mustn’t hang around gossiping with you, Cinderella’s stepmother will be along in a minute and she’ll have my guts for garters.  She works me and Cinderella to the bone…”)

At its best, audience involvement has a purpose.  (“If you believe in fairies, clap your hands…”)  On the other hand, if it’s being done for the sake of form, then it can get in the way.  I have seen pantomimes in which it seemed that every character was talking to the audience, and doing so in much the same formulaic way, starting with a personal introduction.  That was dreadful.  Far from building different characters, it made everyone sound the same.

So who should talk to the punters?  (See this post if you’re not familiar with the stock characters.)  In my view, this should depend on the needs of the plot.  Most commonly, it’s the dame and the clown; keeping the audience up-to-speed with what’s going on is a major purpose of the “comedy link man” role.  The good immortal (fairy) generally uses soliloquy rather than direct conversation with the audience.  The villains (immortal and mortal) usually have a non-conversational interaction – a combination of cackling, insults, hectoring and pantomime threats – anything to get the audience to boo and hiss.  Usually the romantic leads (hero and heroine) don’t interact directly with the audience, but sometimes that fits in well with the plot – think of Aladdin trapped in the cave, appealing to the audience “What should I do?”  (If they’ve been paying attention, then the answer will be “Rub the ring!”)

Ah, but there’s the rub: you don’t really know what the audience is going to say.  These days I try to persuade panto writers not to assign specific lines to the audience, because they don’t have a copy of the script and will improvise wildly (or sometimes not at all).  If you need a specific reaction from the audience, you need to prompt for it, often with a closed question (“Did he go this way?”)  The thing is, you never really know who’s going to be in the audience.  For a “home production”, the writer will have a fair idea.  I saw one show this season where there was a ritual “Hello boys and girls, mums and dads, grandmas and granddads…” and that was fine; that really was the mix of the audience.  However, for another show (with a script from a third party), the writer had written “hello boys and girls” and that’s what the dame said, despite the fact that I was one of the younger members of the audience, the average age being well past seventy.  Whose problem is that?  The writer probably had a specific audience in mind and wrote for what he knew.  As a publisher, I have no idea about individual audiences and don’t see it as my role to squash ideas that will work well in some circumstances.  No, I think this is a role for the director to anticipate the likely demographic and to coach the actors to be able to deal with different audiences.