(What politicians want us to learn.)

Earlier this year, when he was still Secretary of State for Education, Michael Gove wrote a piece for the Daily Mail about teaching the history of the First World War.  In it, he wrote:
‘The conflict has, for many, been seen through the fictional prism of dramas such as Oh! What a Lovely War, The Monocled Mutineer and Blackadder as a misbegotten shambles – a series of catastrophic mistakes perpetrated by an out-of-touch elite.  Even to this day there are Left-wing academics all too happy to feed those myths.’
Gove seemed to believe that these representations of the First World War were all left-wing propaganda that let the Germans off the hook:
‘The ruthless social Darwinism of the German elites, the pitiless approach they took to occupation, their aggressively expansionist war aims and their scorn for the international order all made resistance more than justified.’

I’ve just refreshed my memory of Oh! What a Lovely War, courtesy of an excellent production by Winchester Musical and Opera Society.  This confirms that it does nothing to let the German elite off the hook; they are there explicitly behaving badly in the opening sections of the show.  However, thereafter the show looks at the war from the British viewpoint (particularly those facing slaughter on an industrial scale).  As for its critique of the British commanders, this was drawn largely from the work of military historian Alan Clark.  The same Alan Clark served as a junior minister under Margaret Thatcher.  From Gove’s viewpoint, Clark is a left-wing propagandist.  From my point of view, the value of Gove’s contribution to First World War history is much the same as Blackadder’s opinion of the deterrent theory of the European balance of powers.

As a skilled politician, Gove wrote a nuanced piece which left open the door to different interpretations of history whilst giving his fellow travellers plenty of opportunity to describe their opponents as unpatriotic.  To my mind, however, he did a disservice to all concerned.  His piece said next to nothing about how the First World War is actually taught whilst implicitly branding as unpatriotic everyone, including the many who would normally occupy the same political ground as him, moved by productions such as Oh! What a Lovely War.

Devised pieces of theatre have an abiding weakness.  I’m going to illustrate this with an act of heresy.

Devised theatre means that the show is created largely or entirely by the cast, usually through a collective workshopping process.  This was the approach taken by Theatre Workshop under the direction of Joan Littlewood to create Oh!  What A Lovely War.  The show is a series of sketches or vignettes about the First World War, interspersed with period songs.  There’s comedy and pathos; some of the sketches have real bite.  It is arguably the most famous piece of devised theatre – created in 1963 and still in frequent production.  It seems heretical to criticise it. However, in my opinion, it is flawed.

One of the early sketches features a sort of Music Hall master of ceremonies – in one production, I saw this role played as a ringmaster.  The figure cracks a couple of period jokes and starts talking about what is to come, apparently shaping the show.  What I would expect from such an opening is that the strongly-established character will reappear later in the show to introduce new material or to take the show in a different direction, but it never happens: the character is put firmly in place, then dropped.  The result is an abiding disjunction between the parts of the show.  That’s the weakness of devised theatre: there’s no controlling mind.

I said as much to Joanne Denson, the leader of the YT2 youth theatre group.  This was in the context of a discussion of their current project, a devised piece starting in the realms of folk stories and exploring a modern, darker equivalent.  Joanne took the easy option – she agreed with me – and then followed-up by asking if I’d care to write a script from their devised work.

I should say that I’m not alone in taking the approach of becoming the controlling mind.  Lazy Bee Scripts has published a number of scripts that have their origins in devised pieces, notably Helen Sharman with Death of an Angel and Floor 13 and, in a completely different approach (for a younger group), Sue Gordon with Dear Diary – A Presentation for Christmas.

I came to the YT2 show at the end of their series of improvisation workshops.  That process had created a set of core characters (and a few less defined “friends”) and a coherent story, divided up into defined scenes (or phases of action, since it is intended to run continuously without changes of set).  My role as writer in this case was principally to create consistent dialogue and to ensure the coherency of plot and consistency of character.  (I also had to make sure that it was capable of running within the projected time constraints.)

The result is Sleeping With Beauty.  It’s a piece about teenagers, so comes with disturbing themes amidst the bravado, comedy and vulgarity.

After a preview, courtesy of Salisbury Playhouse, on July 12, Sleeping With Beauty will be staged at the Edinburgh Festival Fringe (Spotlites @ The Merchants’ Hall) on August 18 and 19. 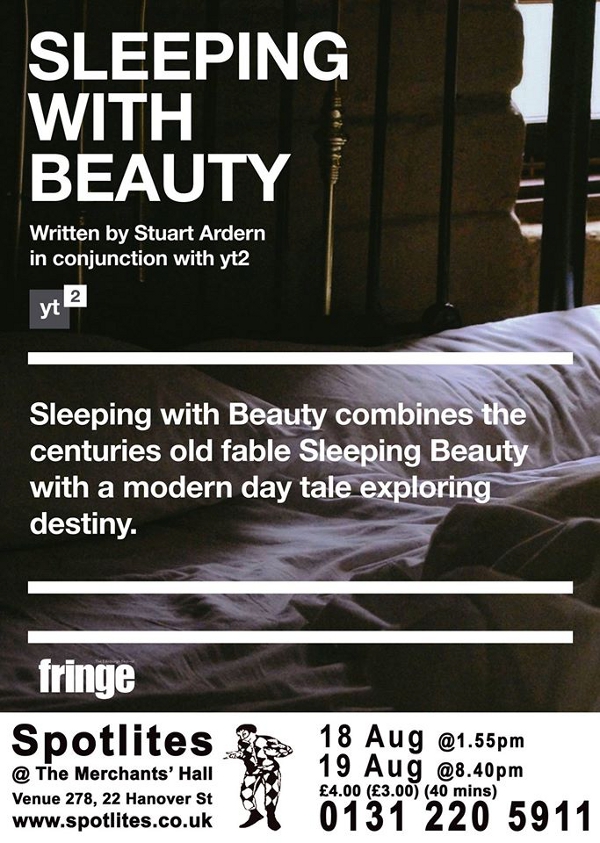