At the start of every play there is (or at least, there should be, even for a monologue), a list of roles.  The main point of this list is to tell the reader who’s in the play.  The reader might be a producer, director or actor, it might also be the publicist for a show.  I have some strong views about what should be in this list – and what should not.  These are opinions, of course, but they are based on some degree of rationality…

I take the view that ‘cast‘ means the actors who play the characters.  The list should therefore be headed ‘Characters’.  (You could also say Dramatis Personae, but only if you want to sound pompous.)

I know it sounds obvious, but the character list should list every character, preferably by name, but certainly with a clear tie to the way lines are assigned in the body of the script.  Thus if the lines are assigned to “Man”, the Character list should include “Man” (rather than Mr Smith), though it would be better to give him a name in both places.  (When I wrote that in another post, Andrew Allen took to Twitter (@my_grayne) with the excellent response “I always name characters if for no other reason than: ‘Helen’ looks better on an actor’s CV than ‘Woman 4’”) 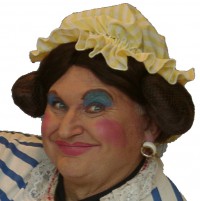 If a character’s gender is essential to the plot and not obvious from the name, then it needs to be stated in the character list (because you really don’t want to make a fool of the casting director).
Sam could be male or female, and if this matters, it is better to say which.  Mrs Bonaventure is obviously female, so you don’t need to comment on gender unless your character is a drag artiste.

The relationship between characters can be useful, usually as a pointer to relative age.  For example describing Gemma as ‘Steve’s daughter’ puts some useful constraints on casting.  (But how old is Gemma?  If it’s germane to the plot, then ‘Steve’s teenage daughter’ or ‘Steve’s adult daughter’ is appropriate but more constraining.)
It isn’t Complicated
Describing Liz as ‘Steve’s third wife, previously married to Anton and having an affair with Carl’ is mainly information that the reader should discover in the text.  (And if it isn’t part of the plot, then it’s irrelevant.)  Usually ‘Steve’s wife’ will be enough. 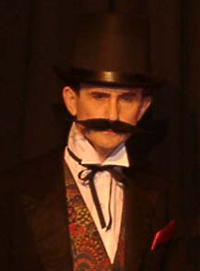 Role in the play

Squire Blackheart – the Villain.
If the characters are not related to one another, it may be useful to say the role that they play in the drama.  This may, in the above melodramatic example, be a generic type (useful in things like pantomime – Principal Boy, Principal Girl, Dame – because it tells the reader what to expect from the role.)  It may also be a job, because it helps the reader to distinguish between ‘Sister Louise – a nun’ and ‘Sister Sara – a nurse’.

If a character’s age is essential to the plot, then it should be stated in the character list, either as a very specific age, or as a range.  (The broader the range, the less essential it would seem to be – and ‘relationship’ would be the more likely determinant of casting.
I am rather cautious about putting in ages, and I have a general feeling that this should be the last item in most descriptions.  The reason for this is that one of the potential uses of the character list is for the publicist to copy and paste into the programme for the show.  In that case, age may be a distraction – it may have been useful to the director in casting the roles, but once they’re cast, they are what they are.

The character list should not reveal the plot.  Get rid of anything that hasn’t happened yet that will happen in the story.  Get rid of any secrets that will be revealed by the script: ‘Paul the gardener, Ingrid’s long-lost son’ is plot.  Imagine that cut and pasted into the programme for the show.  This is not the place to give it away.

The character list is not the place for a pen-portrait of your character.  If you find yourself writing ‘she is timid, but anxious to please and to be liked’ then delete it.  That part of the character’s behaviour should be evident in the script, and the actor should be encouraged to find it there.  You should not use the character list to tell the reader something they can’t find in the text.  If there’s an essential back story and it isn’t in the text, how is the actor supposed to communicate it to the audience?  (Even if you put it in the show programme, not everyone buys one and not everyone absorbs every word before the curtain rises.) 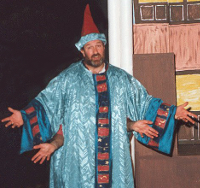 Does the description fit on a single line?  If not, it’s far too long.  This encompasses all of the above points, but is also an aesthetic choice – if each description fits on one line, it just looks better.