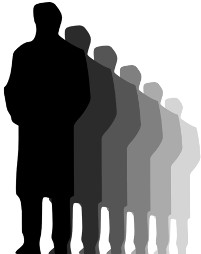 The Nuffield Theatre in Southampton have Caryl Churchill’s A Number in their current season.  It’s an excellent play.  (There was a brilliant radio version a while ago, with Michael Gambon playing the father.)  If you haven’t come across it, you can think of the writing as being like Molly Bloom’s soliloquy at the end of Ulysses.  That’s the one that contains a single sentence of 4,391 words.  A Number is a play, so the sentences are much shorter, but the style is similar with streams of ideas overlapping, hesitating and interrupting.  It’s brilliant, because that’s the way most of us normally speak.  The late Alan Coren was a notable exception; he had the knack of extemporising perfectly grammatical essays.  Most of us struggle to keep to one subject for the duration of a sentence.  (When I worked in a big company one of my colleagues reported a presentation by the managing director by saying “I counted seventeen sub-clauses without ever reaching the main verb.”)

I encountered A Number at a play-reading with my friend Dave.  Dave is a great guy, but sight-reading scripts is not his forte, and A Number was a real struggle.  If you’d cut his finger off, he would have gone completely silent.  He had great difficulty with speeches like:-

“It wasn’t perfect. It was the best I could do, I wasn’t very I was I was always and it’s a blur to be honest but it was I promise you the best.”

To some extent, Caryl Churchill is in a privileged position.  She’s a well-known writer, working with professional companies who already appreciate her work and have faith in it.  They can approach that sort of dialogue in an exploratory way, teasing-out the meaning and finding the way to phrase it as natural speech.  If you are not such a well-known writer, with most of your readership coming across your work for the first time, then you will be given less latitude.  That doesn’t mean that you shouldn’t try to follow the patterns (and disruptions) of natural speech, but, in my view, it means that you should make it clear what you are doing.  The way to achieve that is to identify and separate the different fragments within the rambling sentences.  It shows that you are being deliberate, rather than being a bad writer who has thrown an ungrammatical mess onto the page.  It can be done, but you have to work at it.  You get to something like this:

So, if you’re composing a play, write what you want to write, but also remember that before it comes to the stage, someone has to read it.